Hitech GP finished 2nd in the 2019 Macau Grand Prix over the weekend, with Red Bull Junior driver Juri Vips just missing out on the win. The Estonian had to settle with P2 in the 15-lap race after a long duel for the top spot, despite starting on pole position. It marked the debut of the FIA F3 machinery at Macau’s Guia Circuit, following several advancements to the 6.2km street circuit.

In the first Free Practice session, Renault Sport Academy driver Fewtrell finished 14th in the order with a best lap of 2m10.241s, whilst Red Bull Junior Vips 26th pocketed a 2m13.895s. Fellow Red Bull Junior and Honda F1 backed-driver Tsunoda was forced to retire after crashing out and ending the session in 28th, with a lap of 2m15.763s.
Rocketing to the top of the time sheets in the first Qualifying session, the rest of the grid were unable to match Vips’ perfect 2m7s lap, however Hughes and Beckmann catapulted up the order in the last few minutes of the session. Vips qualified in P3 with 2m06.943s to his name. Fewtrell missed the braking point at Turn 3 and slammed into the barrier, forcing him to retire from the qualifying session. Due to an early incident in the mornings Free Practice session, Tsunoda’s efforts did not pay off as the team spent the afternoon working on his car, which meant the Japanese driver was unable to qualify. 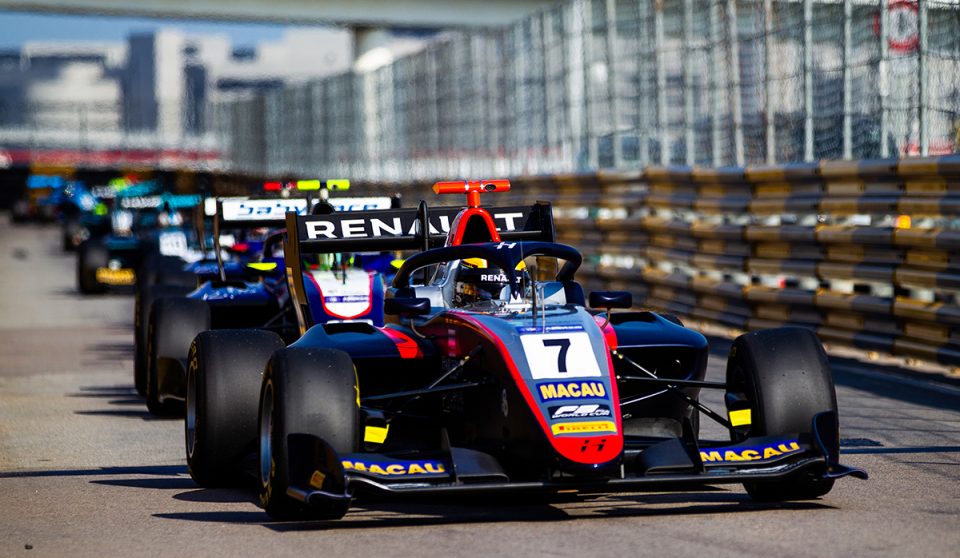 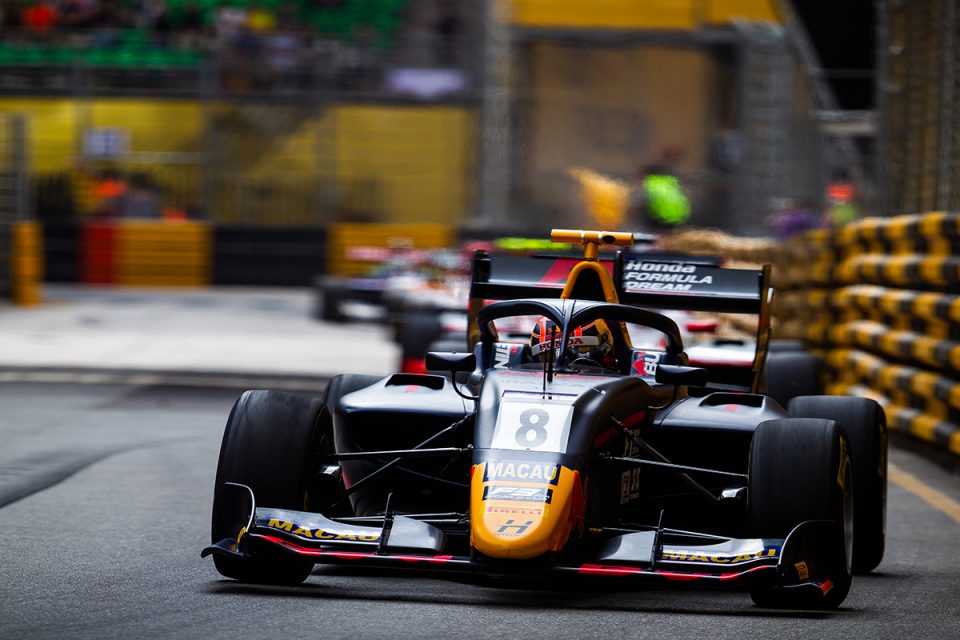 In Friday morning’s Free Practice session – the second of the weekend – Vips rocketed to the top of the order to finish the session in P1. Just missing out on the top 10, Tsunoda completed the practice in P11, whilst Fewtrell added to the order in P19. During the second qualifying session – the all-important decider in the grid positions for the Qualifying Race the following day – Vips smashed the Macau track record to take pole position with a sensational lap of 2m05s around Guia Circuit. He was the only driver to break the 2m05s barrier, finishing four tenths ahead of Shwartzman. Fewtrell qualified in P12 with a best lap of 2m06.4s, whilst Tsunoda completed the session in P20 and 2m07.3s. However, Tsunoda was served a three-place grid drop for the Qualifying Race, due to reversing a considerable distance up the run-off area in Turn 3.

Rocketing off the line from pole, Juri was able to make a clean getaway in the Qualification Race, withholding the pressure behind him. Advancing in his Hitech machine to set the fastest lap, Vips ran from lights-to-flag ahead of Shwartzman, with no chance of giving up the lead. The Prema rival was unable to claw his way past as Vips secured pole position for the Macau Grand Prix the following day. Expertly defending their positions and to settle good grounding for Sunday’s race, Tsunoda qualified in P16 and Fewtrell in P22. 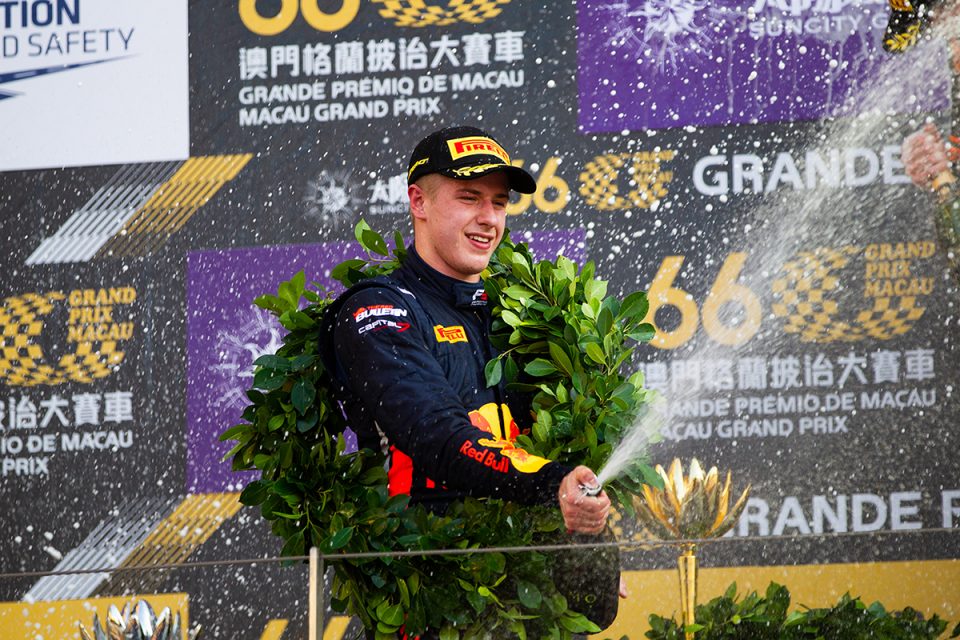 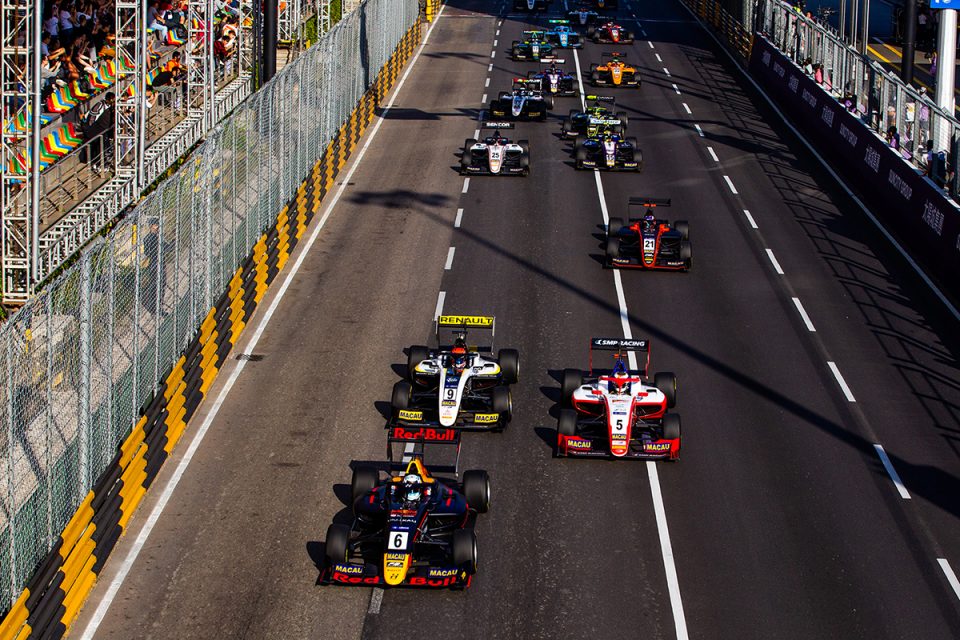 In Sundays FIA F3 World Cup, the squad duelled in a battle for the prestigious title. Starting on pole, Vips stormed ahead of the pack, opening up the gap between the rest of the field behind him. Following a restart after a safety car intervention, Verschoor was able to slip past Vips. Becoming embroiled in a cat and mouse chase throughout the last few laps of race, Vips continued to attack, upping his pace to find a way past the Dutchman. However, it was not enough on his attempt to overtake heading into Lisboa. He had to hold back to avoid the wall in his determination to brake as late as possible. Vips opened up DRS down the straight, but the Dutchman defended and ensured he remained ahead. Vips had to settle for P2 as he crossed the line. Tsunoda finished just outside the top-10 in P11 and Fewtrell in P18.